CBRE Group, Inc., a leader in responsible business practices within the commercial real estate industry, has released its ninth annual Corporate Responsibility Report, which provides an overview of the global social, economic and environmental impacts of CBRE’s operations.“Inside Advantage-2015 Corporate Responsibility Report” highlights the significant accomplishments and milestones of CBRE’s corporate responsibility program throughout 2015 and early 2016.

“At the core of our industry leadership is a commitment to responsible business practices,” said Bob Sulentic, CBRE’s president and chief executive officer. “Our more than 70,000 employees are connected globally by our collaborative culture and our commitment to delivering exceptional outcomes for CBRE clients.”

CBRE achievements highlighted in the report include:

In conjunction with the release of the 2015 Corporate Responsibility Report, CBRE is also releasing its first annual CBRE Slavery and Human Trafficking Statement, available atwww.cbre.com/suppliers.

“Inside Advantage - 2015 Corporate Responsibility Report” was developed in accordance with the Global Reporting Initiative (GRI) G4 guidelines at the Core level and includes the company’s progress toward implementing the Ten Principles of the United Nations Global Compact.

CBRE has been recognized throughout 2016 for its corporate responsibility practices and performance. For the third year in a row, CBRE was included in both the Dow Jones Sustainability Index (DJSI) North America and the FTSE4Good Index Series, reflecting the strength of its performance regarding environmental, social and governance issues. In 2016, CBRE was ranked 15th on the Forbes “America’s Best Employers” list, included in Fortune Magazine's Most Admired Companies for the fourth straight year, included in Corporate Responsibility Magazine’s 2016 100 Best Corporate Citizens List, named a World’s Most Ethical Company by The Ethisphere Institute for the third consecutive year and received an EPA 2016 ENERGY STAR® Partner of The Year Sustained Excellence Award for the ninth year in a row. 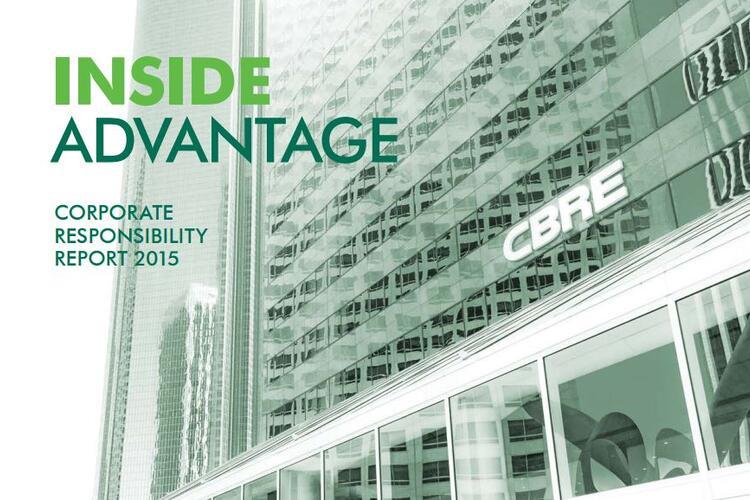